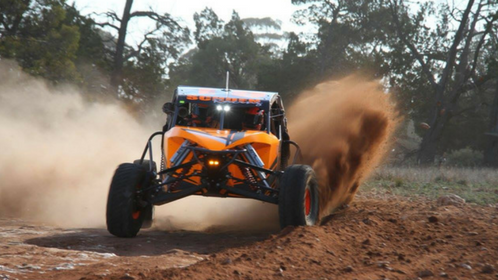 The Waikerie Off Roaders Club again put on a fabulous event at the Waikerie Hotel ARB Riverland Enduro in the Riverland of SA.

With a field of 100 vehicles lining up to tackle the 400 km course it was going to be an epic weekend. Team Mickey Thompson made up over 30% of the field.

On Sunday the teams headed out to complete four laps of the course. Early on lap 1 Aaron Haby suffered brake failure but completed the lap only 10 seconds slower that leader Jack Rhodes, Haby then came in early for his hour break to repair the issue. This would leave him 3 full laps with no stops or tyre change, luckily his Mickey Thompson MTZ P3’s can go the distance.

Conditions were tough with the track chopping up quickly after some rain, which exposed some tyre-shredding limestone base rock.

At the end of the four laps Haby crossed the line first but had an agonising wait to see if he made enough time up to get ahead of Rhodes. Once Rhodes crossed the line he had beaten Haby by only ten seconds. It was an amazing drive by Haby considering the loss of brakes on lap 1 and for the second time on the last lap. Many tyres did not last 3 laps having to be changed after just two, but Haby stated that his Mickeys gave him the confidence to push on knowing they would not let him down.