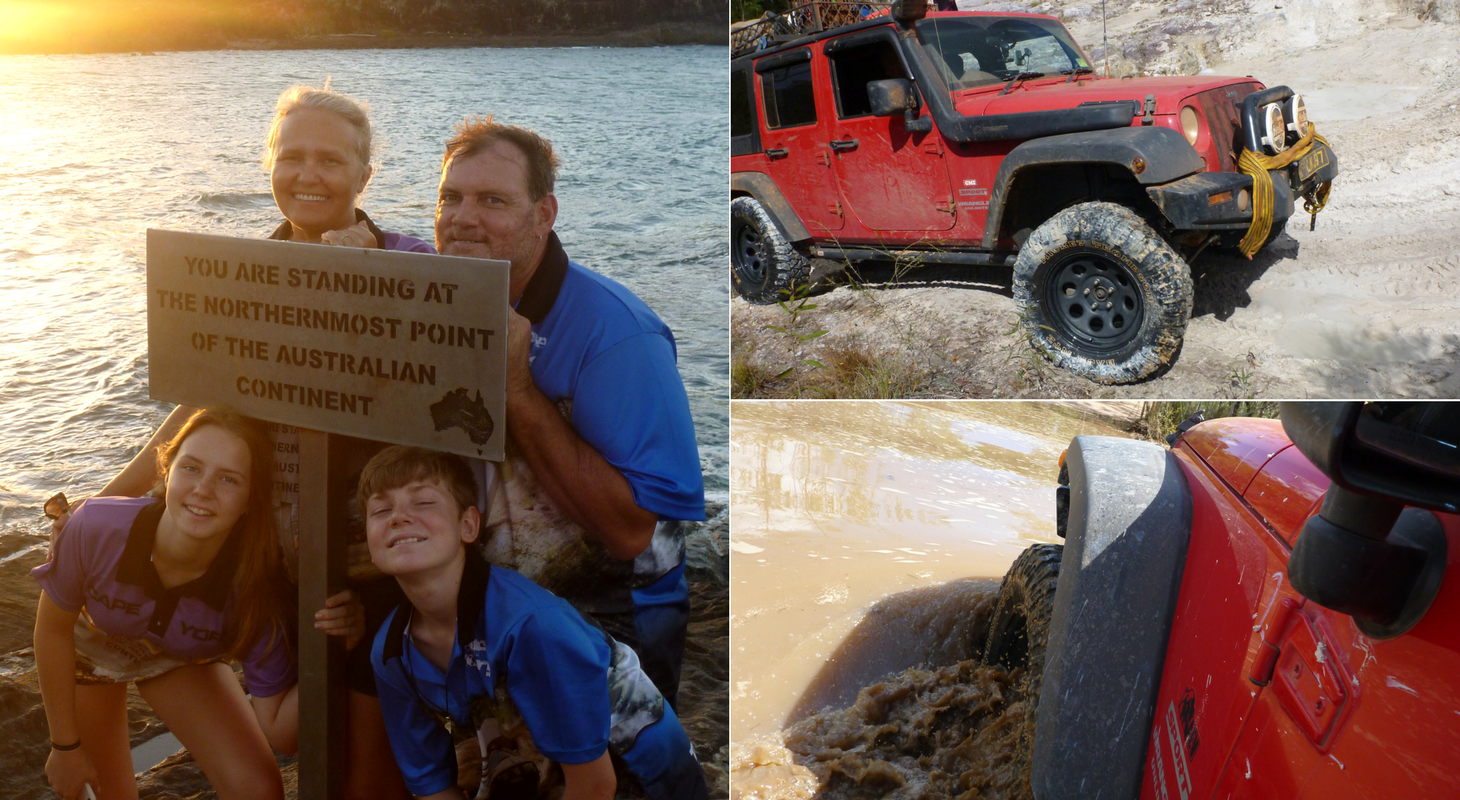 When we made the decision to plan a family holiday to Cape York in 2012 I started to read info boards and web forums looking for a good set of tyres. As I was currently running a good year silent armour tyre (which is primarily a road tyre) and wanted a more aggressive off road tyre to handle the varied terrains of the roads we would find. During my research Mickey Thompson keep coming up as a tyre of choice so I made some ph calls and started pricing a few brands that also can up in some of the forums and magazines I was reading (4wd Action Mag) so I priced MT MTZ’s along with Cooper Max and Good Year. After doing some more research I decided to invest in MT MTZ’s for our trip. I made contact with Keith McKay Tyres in Brisbane (Redhill Store) and spoke to Leon about the vehicle I owned and what I wanted to fit he was more than happy to supply me with new rims and tyres to suit (he even photo’d the car when finished as it looked awesome).

We headed for Cape York in June 2012 along with some friends (all of which were also running MT’s). During our adventures we encountered all sorts of terrain, Mud, Rocks, Corrugation and dirt roads (as you would expect on a Cape trip). I found that the MTZ lived up to its name on more than one occasion where the wide gape allowed the mud to throw and open the treads for much better grip and helped me pull our camper trailer through where a lesser brand may have failed. I also found the wide tread on the MTZ’s perfect for dirt as they tend to also throw rocks from thread, not allowing them to work their way deeper and do damage to the tyre. During our trip we used to adjust our tyre pressure to the terrain which I think is key to performance and tyre wear when off road traveling. Whilst on our holiday we never once encountered a tyre failure or puncture and I think that was due to the rugged construction of the tyre itself.

After returning from Cape York we planned a trip to Fraser Island. With the same tyres on and having minimal wear i was advised to change to a less aggressive tyre as the MTZ’s weren't suited for sand and would bog a lot easier than a normal road tyre. As I didn't have money for multiple sets of tyres to be laying around we went on our holiday with the MTZ’s and never encountered a problem (again tyre pressure is a key I feel) while on the beach and inland tracks of Fraser. During our time on the island we covered just over 1300 klms of sand driving and I think to not have to require getting recovered once was a feat in itself as we covered most of the island tracks.

In our daily life the MTZ’s are used on the black top as a daily driver for myself to and from work and when on days off we use the vehicle to do local trips which include dirt roads, wash outs, rock climbing and just general playing around our local bush. In every instance i always adjust my tyre pressure to suit what I'm doing. 25 normal dirt roads, 20/22 when the road gets nasty or on sand, lower if sand is soft, 16-18 when traversing washouts and as low as 12-15 doing rock work and I'm yet to encounter a bead break/separation or any damage from our local terrain.

Once I got down to replacement I again contacted Leon and this time decided on the ATZ P3 tyre as i had been doing more black top driving to and from work etc. and the 50/50 of these would be more suited. When I arrived he informed me that the tyres has done just on 121000 which was astounding to him and also myself (as I don't take much notice of my klms often). In this time I had one puncture and that was a roofing screw on a local highway. When changing vehicles I also kept the rims and tyres so I could use them on the new vehicle as I wanted to use them for a newly planned Cape Trip (2015). Once again we travelled up and back without a hitch and the tyres performed wonderfully again. There was a noticeable difference between the ATZ and the MTZ in the mud as the ATZ don't self-clean as well, for obvious reasons. But still performed very well overall again with no punctures and tyre damage. When wanting another set of tyres I instantly decided on going back to the MTZ with their new MTZ P3 range as I wanted to do more mud driving and i already know the tyres will withstand my day to day bitumen workload as well

We have travelled to a lot of local area 4wd locations, Land Cruiser Mountain Park, Byfeild State Forrest, beaches and bush runs and have yet to encounter any major flaw in the MT tyre. I attribute the lasting capability of these tyres to the construction of not only the main part of the tyre but to the side walls which allow so much flew and also have a very strong side wall construction. No matter where I go I know the tyres i have chosen will handle the work. I also attribute the longevity of the tyre to constant rotation and always making sure you have the correct pressure for the terrain you’re driving.

Lew and his family drive on:

Llew and his family drive ON: