When Mickey was nine years old, his father took him to the Bonneville Salt Flats in Utah to watch Englishman John Cobbs attempt to break the land speed record. The British Automobile Industry wanted to use the new land speed record to promote their products. They had invested heavily in the design and building of the car which was large even for those days.

It held two huge 16 cylinder Napier Lion aeroplane engines to drive the heavy vehicle across the salt. Cobbs started his engine and thundered across the wide flat surface. Mickey Thompson looked on in awe as the huge car set a new record of 394.2 miles per hour. The international press was on the scene and the world had a new hero. As Mickey stood there on the salt flats beside his father, he vowed that one day he would beat that record.

Many years later, using all his savings, his determination and his courage, Mickey beat John Cobbs’ record in his fifth attempt by travelling across the salt at 406.6 miles per hour in a car powered by four Pontiac engines and held together with spare parts from junk yards. Breaking the land speed record was a high point in Mickey’s racing career, and is perhaps his most important legacy. 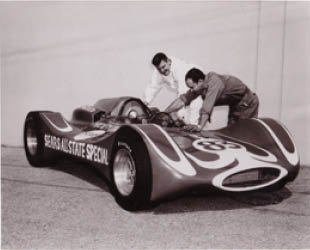 Mickey Thompson with Paul Nicolini, Lead Fabricator and a key member of Mickey's design team, very much involved in developing the 1964 Indy car.