Mickey Thompson's Luv Truck was an iconic off-road racing vehicle in the 70s, when Mickey was racing in SCORE International races.

Born to race! That's the only way to describe Mickey Thompson. As a young man he tried his hand at racing on the California dry lakes, built the first slingshot digger, ran a twin-engine modified coupe at Bonneville, built a twin-hemi-powered digger with which he set everyone on their ear at Bonneville when he clocked 296 mph (the fastest ever for an American race car at that time - 1958), went on to build his Challengers and ran 403 mph one-way, then set nearly 200 national and international records and endurance marks in diggers, both for standing-start mile and kilo stock cars and Indy cars. He started a revolution at Indy with his low, wide Firestone skins, has tried his hand at boat drags, is a licensed pilot, has run a series of successful funny cars, and more lately has become known for his super-wild off-road LUV truck which he races both in SCORE International races and those of other sanctioning bodies.

Like many of his other race crafts, this LUV truck is one of a kind. Mickey has never been known to build a race car like other guys build. He's an individual, and his machines show this individuality. As you can see from this layout, he's got a pretty exotic machine, one we'd hate to put a price tag on. As might be expected, not all of his creatured turn out to be record beaters, but enough of them do that everyone keeps their eyes in focus when his cars are in action.

The chassis under that LUV cab was fabricated at Mickey's Advanced Engineering ship with 2x5x0.090-inch mild steel tubing main rails and .090x2-inch chrome moly lower tubes. Set up for a 110-inch wheel base, the LUV features a 454-inch uliminum block Chevy driving through a B&M modified Toronado transmission and Mickey Thompson modified rearend. Mick made up his own magnesium casting for the rear-end and installed a set of special-cut 3.40:1 gears.

Rolling on a set of 36-inch-o.d. M/T Baja King tires, the MIckey Thompson LUV racer rides high above the desert stage. A full complement of RAC instruments measure oil, water and transmission temperature, oil and fuel pressure, vehicle speed and engine speed. On the straights in some races, Mick and 25-year-old son Danny have had the machine up above 140 mph.

Desert racing is really rough on equipment, especially the big stuff that hits hard when cresting ridges, all four skins in the air. To cushion the pounding the machine receives upon coming down to earth, Mick has been experimenting with a variety of shock absorbers, and he is currently running three shocks on each front A-frame and six on each rear. Brands being tried are Bilstein, De Carbon, Delco and Rough Country. The A-frame assemblies themselves are combos of reinforced stock and custom-built chrome moly units. Ex-drag racer and chassis builder Nye Frank assisted in the development of the front suspension system, which permits 11 inches of travel whie limiting camber change to a meximum of two degrees.

While Mickey has enjoyed competiing on all forms of racing during the past 25 years or so, he claims he's never had as much fun as in off-road racing, nor has he ever raced as hard as with this off-road LUV truck. It's been pretty successful so far, considering the pounding he gives it, though he has experienced gearbox troubles in the early stages, problems he feels are now whipped. Yeah, this is one tough rear-engined LUV.

The truck is now with us at Mickey Thompson Tires Australia, and we couldn't be more excited about it. While the truck hasn't seen a race track in a number of years, we still like to show her off at events, trade shows and product launches over the years.

It's our goal to have the Luv Truck up and running again some day, so it can grace at least one more off-road race track with Mickey's name!

Here are some pictures of the Luv Truck now: 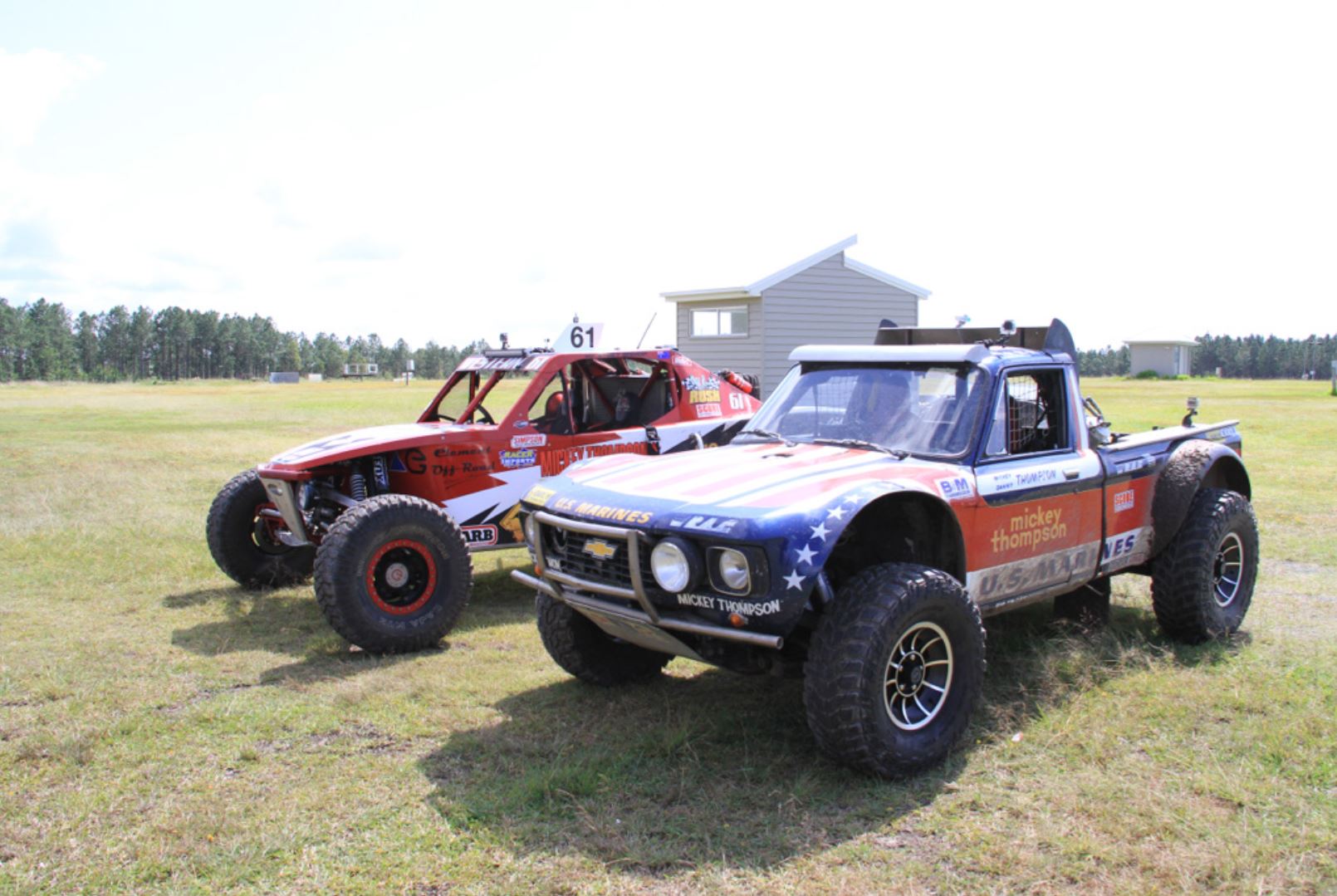 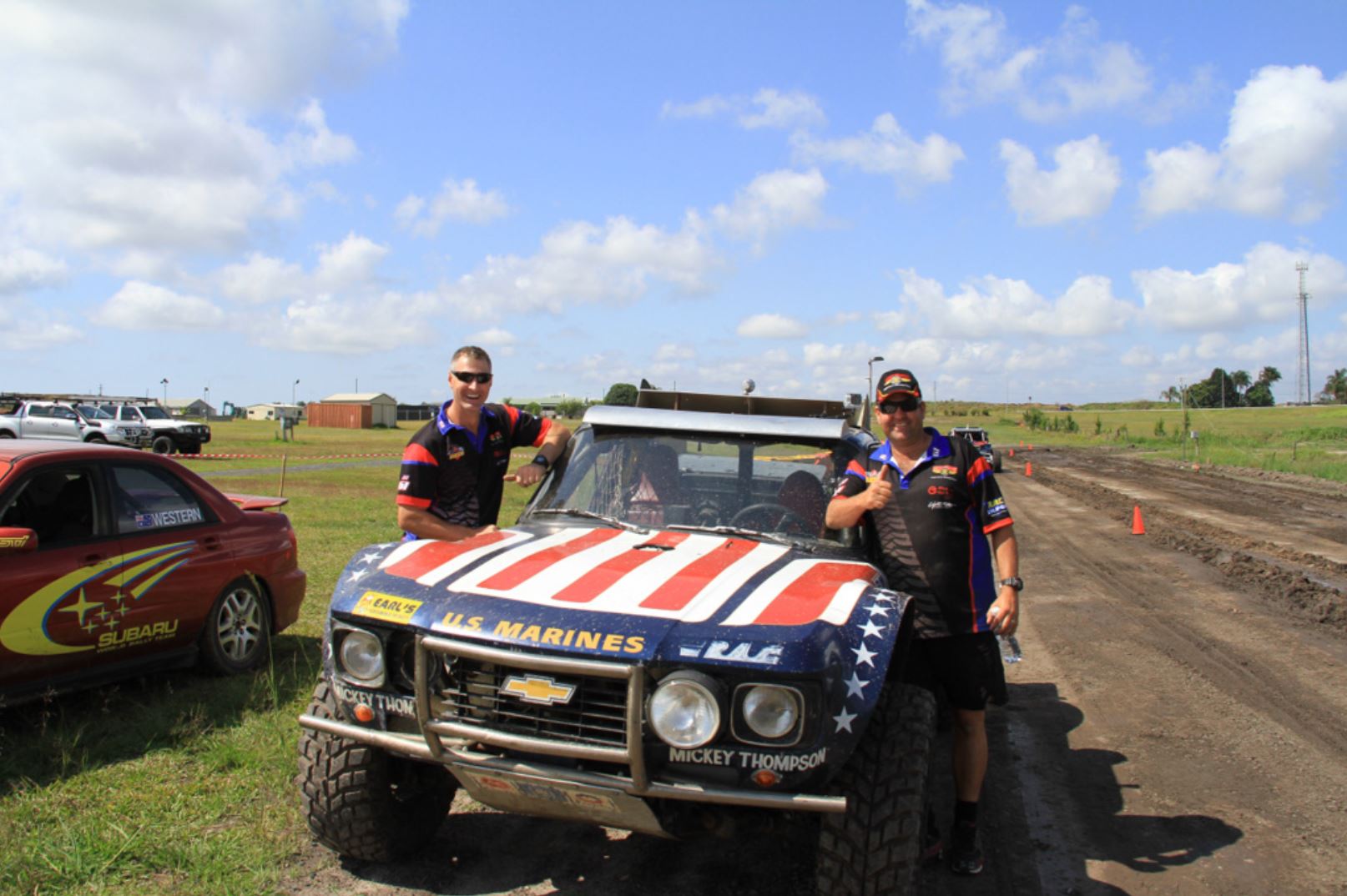