What a year it has been! We've been proud to once again sponsor the ARB Australian Off Road Racing Series in 2017! See below for details on each round, complete with Team Mickey's placings.

The dates for the 2018 calendar have been released.

The event was going to be epic right from the start, 70+ entries with over 40% of the field running Mickey Thompson tyres.

On Friday night, all teams lined up for scrutineering. Their vehicles were put on display for the large crowd of locals to see, who were keen to get up close and personal with these amazing machines.

Saturday kicked off with the Harts Transport prologue. The rain was on and off throughout the day, making conditions slippery - perfect for sideways action. Team Mickey’s Raana Horan and Mark Burrows took 2nd and 3rd places respectively.

The event then moved into the short course heats; three laps of the prologue track in heats of twelve vehicles. The event organisers, Millicent Sand Buggy Club, had arranged a big screen in the centre of the track and six cameras around the track to ensure that spectators always had the best view of the action.

Team Mickey’s Marty Scott hit a hole off-track, sending his Avenger Buggy into a six roll tumble. Both driver and navigator walked away without an issue.

Sunday kicked off with showers and wind again, making for trying conditions for teams with open cockpits. To add to all of this, a reverse grid format was in place. The attrition rate was high with vehicles having issues from gearbox failures, broken CV’s to engine failures. The heavy going in the sand within the pine forest proved tough on both man and machine.

SMU Racing’s Matt Hanson pushed out to a solid six-minute-plus lead heading into the final two laps, but unfortunately blew a power steering pump, which made the vehicle near impossible to manoeuvre through the forest. He put in a massive effort despite this and continued on.

Owen Racing’s Tyler Owen caught up to Matt, and once passed put his head down and pushed hard to make up time after seeing Matt in trouble. Tyler made up the time and crossed the line first on the road. After timing checks, it was discovered that he had beaten Matt Hanson for first place by just five seconds! This earnt Tyler his first ever outright victory, following in the footsteps of both his grandfather and uncle who have both won this event over its 40 year history.

The Mickey Thompson tyres performed faultlessly over the weekend and once again proved their toughness and reliability. Many teams not only race on them but also have them on their transport and everyday vehicles.

ARB Albins Goondiwindi 400 was held on the weekend of August 18th. It was the 40th year of the event and round 5 of the ARB Australian Off-Road Racing Series.

The turnout by competitors was again a testament to the success of the ARB series with nearly 100 vehicles lining up for the 400km event.

Saturday was an early start with a prologue over an 8km course to set starting positions. The top ten then went into a shootout with Team Mickey Thompson’s Troy Duff taking the honours in his Ace Concreting Pro Lite machine. Team Mickey held six out of the top ten positions.

A one lap dash, 80km, was then held Saturday afternoon which left four laps to be completed on Sunday. Team Mickey’s Aaron James finished on top and was in a great position for Sunday’s laps.

The wear and tear rate for this event is huge with the terrain being one of the toughest in Australia. Sand beds, hard pack and melon holes were just some of the obstacles teams had to overcome, not to mention the trees that seem to just jump out at the most inconvenient of times. 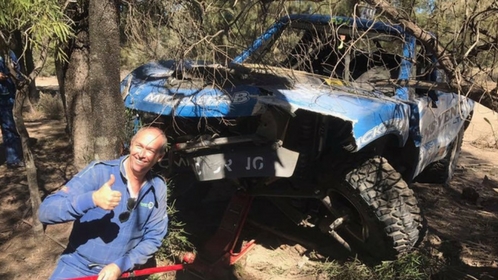 Michael Denham struck out on this one

After the four laps on Sunday Team Mickey came out 1st and 3rd outright, with Aaron James taking the victory and Michael Collins claiming 3rd.

The Goondiwindi Motorsport Association excelled this year in the organisation of the event and we must congratulate them. If you would like to see Life Off Road’s coverage of this round click here.

The final round of the ARB Australian Off Road Racing Series will be held in Millicent SA September 22 -24 and the outright results can still be anyone’s with no less than four teams with the opportunity to take out the series.

The Waikerie Off Roaders Club again put on a fabulous event at the Waikerie Hotel ARB Riverland Enduro in the Riverland of SA.

With a field of 100 vehicles lining up to tackle the 400 km course it was going to be an epic weekend. Team Mickey Thompson made up over 30% of the field.

On Sunday the teams headed out to complete four laps of the course. Early on lap 1 Aaron Haby suffered brake failure but completed the lap only 10 seconds slower that leader Jack Rhodes, Haby then came in early for his hour break to repair the issue. This would leave him 3 full laps with no stops or tyre change, luckily his Mickey Thompson MTZ P3’s can go the distance.

Conditions were tough with the track chopping up quickly after some rain, which exposed some tyre-shredding limestone base rock.

At the end of the four laps Haby crossed the line first but had an agonising wait to see if he made enough time up to get ahead of Rhodes. Once Rhodes crossed the line he had beaten Haby by only ten seconds. It was an amazing drive by Haby considering the loss of brakes on lap 1 and for the second time on the last lap. Many tyres did not last 3 laps having to be changed after just two, but Haby stated that his Mickeys gave him the confidence to push on knowing they would not let him down. 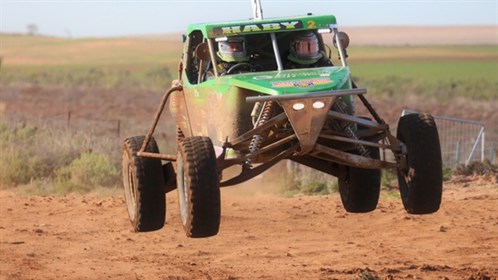 Aaron Haby launching the Element into the air at Sealake.

Round 3 of the ARB Australian Off Road Racing Series was on from the 9th to the 11th of June this year. Team Mickey was strong on the field for round three, with approximately 35% of the field running on Mickey Thompson Tires; 34 of the 98 starters.

No Mickeys were damaged over the weekend, so no spares were needed.

Aaron Haby (pictured above) said that the tyres delivered too much grip turning turtle in the prologue. Starting in 11th place, Haby surged the Element into 3rd outright at the finish. 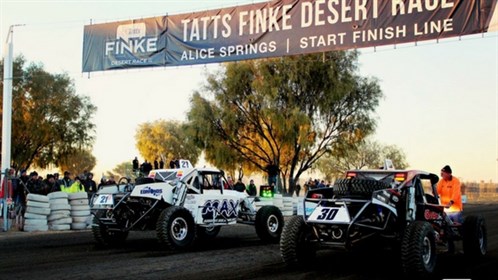 At the recent running of the Finke Desert Race in Alice Springs, teams running the Mickey Thompson Tires found out why they are considered the best 4wd tyre on the market.

This year was one of the toughest with only 72 teams classed as finishers out of 138 starters. Many competitors had tyre issues, that prevented them from finishing the race. Luckily for Team Mickey Thompson, not one of those issues were caused by a Mickey.

Team Mickey had finishers in every class. Three of our teams succumbed to mechanical issues early, Matt Hanson (Fuel Pump), Mark Burrows (Tree) and Glen Owen (overheating), but as they say there is always next year. Congratulations to all the winners. 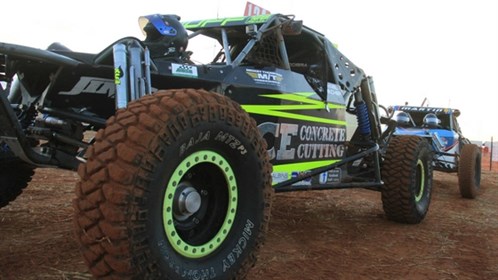 Round 2 of the ARB Off-Road Racing Series is the Sunraysia 400, which was held from April 21-23 in Mildura, Vic.

After a heavy downpour prior to the event small changes had to be made to the track. With mud patches and water laying in areas the teams running the Mickey MTZ P3’s certainly could see an advantage.

Aaron Haby once again proved his ability piloting the Element to 2nd outright mixing it up with the twin turbos and 6 of the top ten overall placing were on Mickey. Team Mickey also took the most trophies away for the weekend across all classes.

Of the top ten outright placings 6 were racing on MT 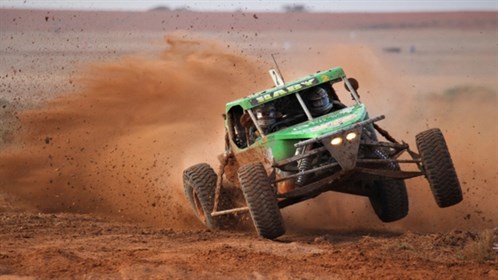 Round 1 of the ARB Off-Road Racing Series kicked off mid-March with the ARB/Town and Country Tyres Stackpoole 400, held in Griffith, NSW.

Prologue was held Saturday morning with property owner and Team M/T newcomer Andy Ryan who topped the times, 12 seconds ahead of Glenn Owen with Andy Brown.

Andy Ryan took out the win with a massive 6+ minute lead on Talbot Cox in second place and Dale Martin in third place.

Andy stated (as published in issue 1707 of Auto Action) that he owed his winning off-road racing performance to the change to Mickey Thompson tyres, saying that they have better grip and lasted longer than his previous ones. 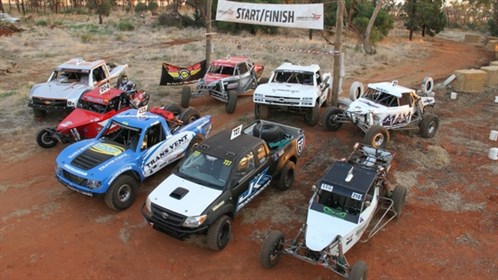 Team Mickey also had great success in the other classes.

The terrain and dust proved very difficult for many competitors with only 48 of the starting 89 starting vehicles being classed as finishers.