Shooting for a 6th Finke win 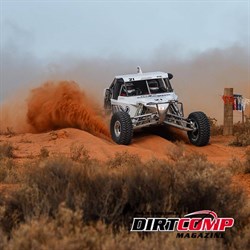 Motorsport Hall of Fame inductee and member of Team Mickey Thompson Mark Burrows is finishing his final preparation on the Jimco #21 ready for his 20th assault on the Finke Desert race. Out of 19 starts so far Mark has managed to take the chequered flag a massive 5 times.

Mark started his racing career at the age of 16, in 1976, and over the years has racked up 7 National Championships. Mark is a laid back hard working Aussie with a great sense of humour but when he slips that helmet on and straps himself in it all changes to a determined and professional racer.

Mark recently changed over to Mickey Thompson running the newly released MTZP3. When we approached Mark for his comments on the tyres, after his run at the Sunraysia 600 in Mildura, he could not speak highly enough of them. “I can now brake later, corner faster and the traction accelerating out of the corner is phenomenal, the vehicle drives so much better”.

We wish Mark all the best at Finke, keep an eye out on our Facebook page during the event as we do live updates direct from Alice Springs.

Shooting for a 6th Finke win