This year was our first attempt at the Sea Lake Mallee Rally, Everyone talks about how great the race is and we were not disappointed.

Saturday we got off to a good start qualifying 2nd in class and 18th outright with a field of 101 vehicles.

With the top 2 vehicles from each class competing in the dash for cash we were excited to put on a show for the large crowd, we ran wide on a corner in the first lap and lost a lot of time but we were lucky to get a good run on our second lap with no mistakes. We clocked the fastest time for all the classes in the dash for cash and got the class win.

Sunday the track was starting to dry out, still very muddy in spots and the other half of the track was dry and dusty. We got off to a great start and passed 3 vehicles when trying to pass our 4th vehicle we cut in tight on a corner through a puddle covering us in mud, with our visors covered in mud and struggling to clean them we were forced to pull over and clean our visors losing all the positions we had gained. Slowly making up ground until the start of the 3rd lap on another passing attempt on Marty Scott his Mickey Thompsons showered us with rocks, the truck was losing power after slowing down we discovered a large rock had landed on the turning brake jamming between the turning brake and gear shifter causing the back brakes to drag, after removing the rock we were back on track again until the 4th lap we were forced to pull over a few times with ignition problems. The 5th lap the truck was going great we managed to make up some of our lost time, Our Mickey Thompson MTZs worked great in the slippery muddy areas and we could not believe the traction we had on the fast sweeping hard packed corners where they were getting some real punishment.

We finished the 450km event on a single set of tyres and they are still in great condition, We placed 1st in class and 13th outright.

Congratulation to the winner Brad Chasemore and Sea Lake Offroad Club for a well run event. 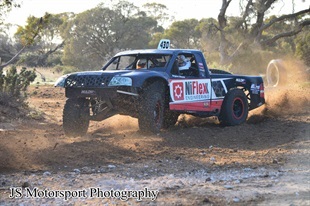 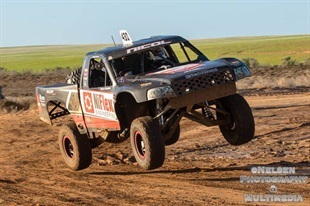