The lead up to Finke was hectic with putting engines on dynos, not getting the power we had hoped for, then had cam shaft and valve springs changed to which we got a little more power, so we fitted the engine to the truck and did some testing but found we still had problems at high RPM so out came the new engine and back in with the old engine which had been rebuilt by my son Andrew.

Just before leaving for Finke we took it for a quick test run out the farm and then into the trailer. We also loaded my daughters bike in as Katelyn was riding the Finke race. A couple of days to get to Alice Springs arriving Tuesday evening, bit of shock testing Wednesday, Thursday rest day and interviews for SBS TV coverage.  Friday midday Australian Off Road Championship meeting then followed by scrutineering.  All went well great night with huge crowd, lots of fans of the new look truck.

Saturday we lined up for prologue - wasn’t the best prologue 31st.  Just couldn’t get the motivation required for a quick run although it was a clean run with no mistakes. We then waited for Katelyn to complete her prologue with the bikes.

Sunday we headed off from the line on our way to Finke. We had not pre run the track so had no idea what to expect, so we just drove to what we could see, getting used to the whoops as we went. The old engine was running great very strong and drivable. We were happy with our progress passing a few cars and been fairly conservative. At about the 130km mark we noticed power steering fluid on our visors so we pulled over to bypass the power steering cooler that had split. We lost a lot of time but got going again. At about the 150km mark we saw the thick smoke from a car/buggy on fire, it was enough to distract me, missing a call on a danger sign and not paying enough attention to the track hitting a crest and landing in the hole on the other side rebounding us end for end putting us out of the race and severely damaging the truck. The roll frame designed by ID Designs and made by Gavin Mickle did its job fantastically with Andrew and myself unhurt but with bits of the truck scattered everywhere. With the engine and transmission broken our race was over. We were very happy with the performance of the Mickey Thompson MTZP3s - even the spare tyres have great grip grabbing the ground while upside-down and flicking us back over -  almost too far.

Big thanks to Jeff Newick and all the crew at Mickey Thompson for their continued support. It is fantastic to be a member of a great team.  We will rebuild and be back as soon as possible looking forward to 2017. 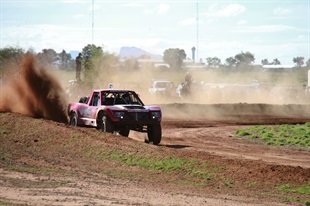 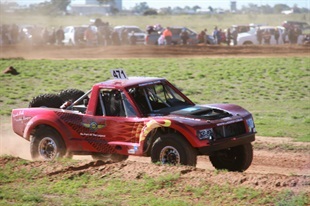