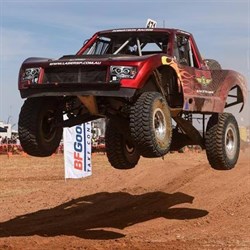 Off Road racer and Mate of Mickey Ivan Robertson is about to tackle the famous Finke Desert Race. He has been busy preparing his #471 Micklefab Trophy Truck with a new motor and gearbox. Ivan will have his son Andrew beside him navigating. This is not the first time 23 year old Andrew has navigated for his dad, similar to Mickey Thompson the racing is in the family’s blood. Andrew also does most of the preparation on the truck so he knows it inside out.

For many years Mickey’s son Danny took the navigating seat and this is how he cut his teeth in off-road racing. Ivan’s #471 is sporting a new eye catching livery in candy apple red and flames, first unveiled at the first round of the Australian Off Road Championship held on Ivan’s property at Mildura VIC, you won’t miss this truck. 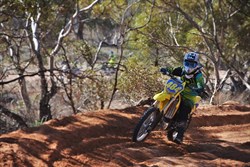 Not only is Ivan’s son competing but also his 19 year old daughter Katelyn is hitting the track on a bike. A competent rider with 2 club championships to her name, Katelyn has a great chance of finishing high on the list. Her bike is a Suzuki RMZ 250 and with living on the family property, Keera Station in Mildura Vic, she has plenty of room to practice, time is her only problem with crops to be sown she is spending most days seated on a tractor of late.

Keep an eye out on our Facebook page as we will be doing live updates over the weekend of Finke.

We wish the Robertson family all the best for Finke.