Raced the Jeep again last weekend at the Milbrodale Mountain Classic NSW round. One week prior we thought we were 100% ready so I took it for a final test drive and it came back looking like this. 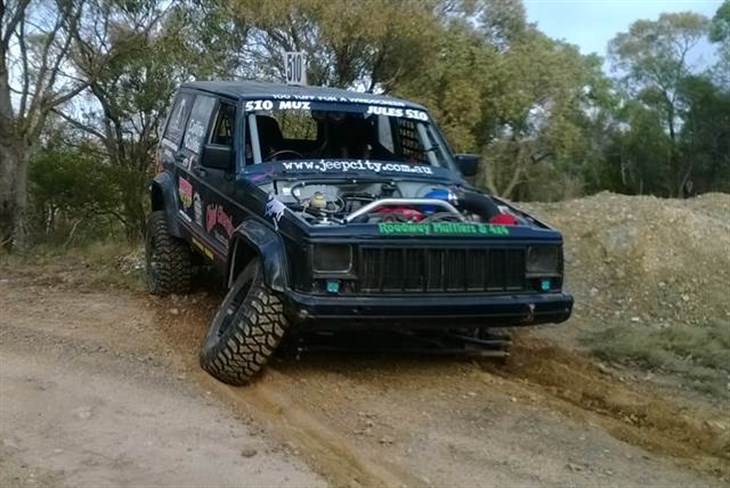 Wheel bearings had let go. Dad and I evaluated the situation and Dad decided to come back to our place and fix her up again. It needed steering knuckles, Ball joints, bearings and brakes.

Magnum steel stepped up and welded us up some steering knuckles (these are custom OTK over the knuckle steering) so we couldn’t just bolt on old ones. Jeep City stepped up and provided us all the parts we needed, Special thanks to Brett and the boys. DAMS as always stepped up and gave us the tools, knowledge and support needed. Glenns 4x4 wreckers helped out with new second hand gear. Dad stepped up and spent a few long nights in the shed with me getting her back ready.

Next was the trip up there and looked what happened – 2 tires!! Obviously not Mickey Thompson’s. 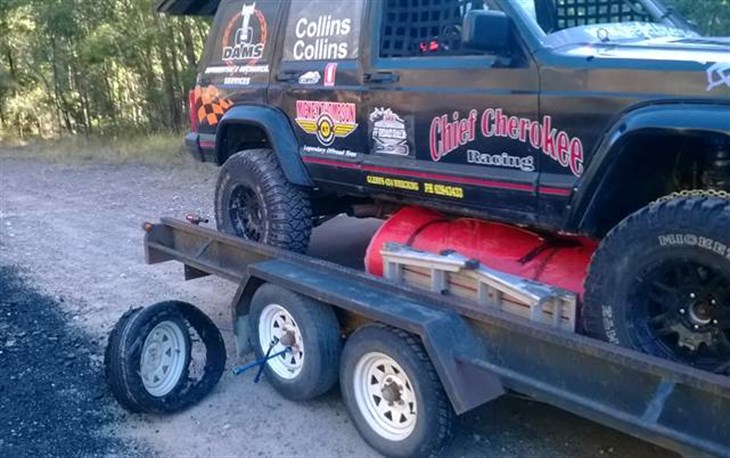 They say bad luck comes in three’s so we were waiting for the next one. Prologue on Saturday morning was very fast and we won class by over 30 secs. Dad made some suspension mods to the front end that really paid off (more preload on the primary spring and secondary to come in earlier) allowing us to hit the big jumps heaps harder. 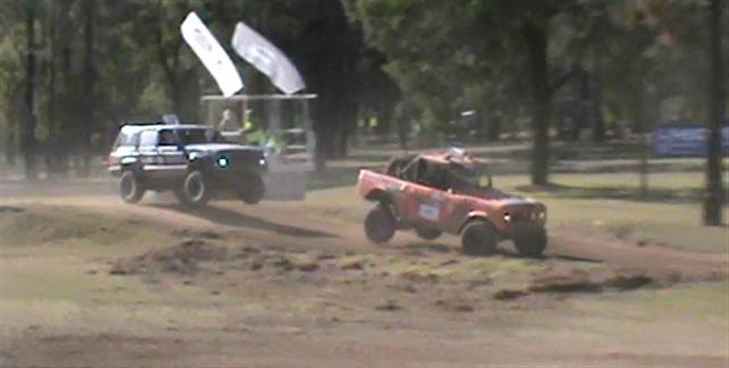 Next was the race and guess what – the car wouldn’t start!!! The battery had gone flat. We had been chasing a loose wire in the electrical system giving us an intermittent miss on #3 injector and all the starting and stopping smashed the battery. Our jumper leads then had a fault and we missed the first lap of the race. We did make up heaps of time real quick and managed to pass heaps of cars in no time (all caught on in car video). Most cars had tyre troubles due to sharp nasty exposed rocks, our main competition had 3 flats over the weekend and unlike us was not running Mickey Thompsons. We got back in front and after a few races stretched the lead to around 25 minutes.

Tyres became a big enough issue that they put warnings out on some rocks and made an announcement. We still have not busted an MTZ!

Going into the last race of the day (long track) we decided to cruise and simply finish as we were in a great position. Lap 4 of 6 and all was looking great we stalled and could not fire it up again. Half hour on the side of the road saw our lead disappear. We got going again with jumper leads on a recovery car and finished strong with 2nd in class.

4WD TV were there and gave Julie and I an interview. They will be doing a 30 min TV show soon so we might get some footage.

As always thanks for the continued support and we look forward to the next one.