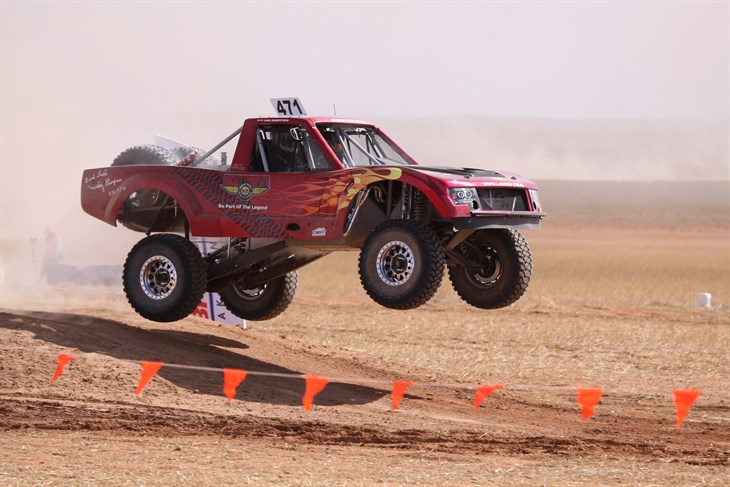 The first round of the AORC was held on our own property Keera Station.

The Micklefab 471 truck had a major service from front to rear over the off season with new tie rod ends, had a uni ball hand brake fitted, transmission service, diff rebuild and some other upgrades including new paint work and signage. The truck has never looked so good thanks to Jeff Newick from Mickey Thompson and their design crew, Pollys Panels Mildura & Laser Signs. We have had the engine rebuilt and it arrived the Saturday the week before the race with no time to tune for the race. We decided to fit an engine that my son Andrew had resurrected from parts of three old engines. It was still a rush to be ready for the race but we made it.

Friday night scrutiny went well and the new livery on the truck was a surprise to all and a big talking point. Saturday morning was first drive in the truck after repairs. Prologue recon was very dusty so no chance to do much except follow the dust and look for the track, the truck felt good.

For prologue 471 got off the line very well putting the power to the ground through the new MTZ P3’s. It just launched changing into top at the base of the first jump then straight in the left hander holding it flat, I couldn’t believe the lateral grip of the tyres.

Heading north away from the pits about a km from the start the cab began to fill with smoke, at first we thought maybe some p/s fluid leaked onto the exhaust but the smoke just got worse. By the time we had finished prologue it was getting a bit scary and we had backed off but still lots of smoke, transmission was toast, to says we weren’t happy would be correct (but the engine went great).

But we filled in the weekend helping out others that had a lot more worries than we did making our transmission a minor problem in comparison.

I was very impressed with the performance of the new MTZP3s, they gave great traction and handling and to put up with what we throw at them they must be good.

It was good for the Mickey Thompson MTZP3s filling the 1st and 2nd outright placings after 600 km of racing on one of Australia’s toughest tracks and I am looking forward the next round at Finke.