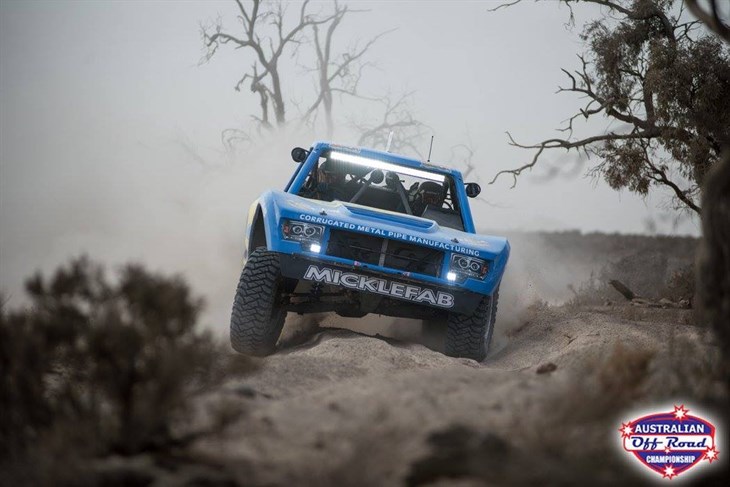 After another busy week of prep after the Condo 750, The 433, CMP Manufacturing / Trans Vent’s MickleFab Raptor TT was ready to head out to Midura.

Prologue went well and I'm happy with my improvement with the ability of reading the track at speed in the truck. We ended up in 38th on the start order but the day was only young.

Our first two laps on Saturday went OK but dust and a little more dust, just couldn’t seem to get a clear run on the cars in front. 50km to go and we were getting called up, we stopped to let them by and after what felt like a lifetime, a truck gets past with a buggy right in his dust. At the end of 200 dusty kilometres we managed to get 28th fastest so we had our place for Sundays 400km run.

After seeding and some non-starters we were out 27th on Sunday morning. After another 100km in the dust, it was about time I trusted the new Mickey Thompson tyres and went off the cars in front. After pushing for 40km we got past the truck in front and into some clean air. WOW, what a difference. We could not only see what way the track went but just how big some of the holes were, but the MickleFab truck is handling them well so why back off for them now. We finished the first 200km run in clean air.

With 200km to go, the second section was free of incidents, we managed to catch two more buggys and pass them within 2-5km of catching them. I continued to push to my limits as I wasn’t at the trucks. Ending up 8th on the road, 9th outright and 3th in class for my first AROC round, I am pleased with my performance and can’t thank the people that helped me do it enough.

Big thanks to all that have made the event happen, CMP Manufacturing, Trans Vent Spiral Tubing, MickleFab Off Road Racecars & Mickey Thompson for getting me to the event and letting me loose on the Robertson’s paddocks .