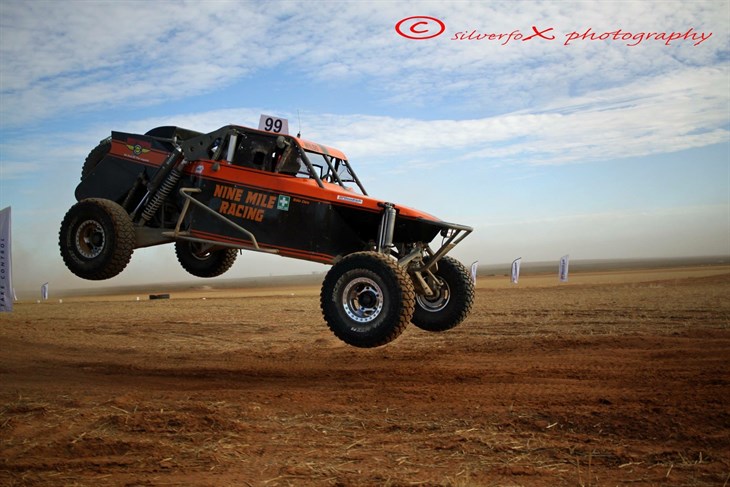 Well after many set backs and an engine sensor issue we managed to get the car to the end of the race which was our major goal of the weekend.

There are still some issues unresolved which are holding us back from getting the engine to perform to its potential but we still managed to do some respectable times on Sunday which gives us confidence going forward.

Also it was great to finally meet Jeff Newick of Mickey Thompson Tires on the weekend. I want to thank you Jeff not only for myself but for the many other teams that you are assisting to go racing.

It's awesome what you at Mickey Thompson are doing, as it does make a difference and it's even all the more better that the tyres are awesome too, The new BAJA MTZP3s performed faultlessly and will be good to go for the next race.

I did have to change one tyre in the race, but the tyre went flat because I hit a tree stump in the dust and I thought I'd done some serious damage due to loud knocking, then the front wheel locking up. What had happened was I dented the rim to the point it locked on to the brake calliper and broke the bead of the tyre, so it went down.

With some quick work from Blake we managed to dislodge the rim and get it changed.

After the race, found there there was no damage to the tyre.

So I've got 6 tyres still good to go.

Blake and I want to thank Bevo, Lizzy, Tyler and everyone else who was there on the weekend for there efforts and especially Colin, Trevor and Trent Clare for which without there support none of this would be possible.

And thanks to those of you out there giving me your supports and comments, its cool to know that your interested in seeing how we are going.

Cheers all till next time.