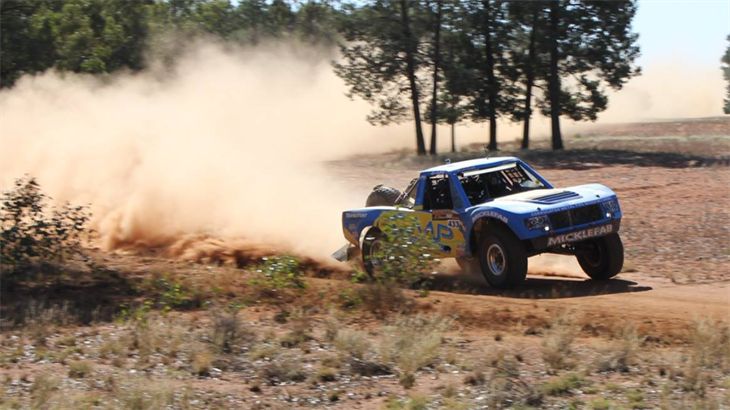 After a crazy 3 days of Prep after Griffith, The 433, CMP Manufacturing / Trans Vent’s MickleFab Raptor TT was ready to head out to the Condobolin.

Documentation and scrutineering went off without a problem. Back to camp and Ross had put the rout charts in the scroll for the first two sections of Saturday. Filled the Truck with fuel and time for some sleep after a busy week of prep.

6:30 Saturday and time to warm up the Raptor as we are out as car 1 due to our finish result in last year’s event. 7:00 and it’s time to go, it’s an odd feeling driving the CMP Manufacturing Trophy Truck down the main street of Condobolin.

Start of SS1, Car 1 & dust hanging in the morning air from the camera crew heading out some 5 minutes before. GO and only 7.4 Km up the truck and this makes no sense, lost! Back track to a place where we were correct and try again. Due to the back tracking we dropped to car two on the road and now thick dust to add to the confusion. Managed to get to the 30Km point and lost again. After finding the track a again and with the wind starting to blow some of the dust away we see we are car 3 on the road, in trying to make up time at the 40km point a small oops and clip a gate at 160kph with the right side, pulled the muffler clean out to the truck, busted fiberglass and 1 destroyed gate but how did that Mickey Thompson tyre stay up I have no clue. The end of the stage and can’t hear due to the noise and we have dropped 6 + minutes from car 1.

SS2 Car 3, Still can’t hear the navigator and after missing a turn left, hard to see and driving of 6Km in the wrong direction, then 6Km back, find the road, where we are on the road is anyone’s guess but push on. Over a crest to… STOP, there is my brother, Warren in the Trans Vent / CMP Manufacturing Triton. Both of us lost, Spin it around but we got the jump on him and strayed in front. Into tight trees but rough, clipped a tree with the left rear and more fiberglass to fix. The end of the stage and dropped another 7 + minutes to car 1.

Service and the only things to do are removing the remainder of a smashed left rear guard and fit a muffler that Gavin Mickle had managed to get off a HQ Holden.

SS3 and with being able to hear the Navigator, perhaps we won’t get lost in this one. And lone behold, a trouble free run and making 4 minutes on the lead car.

The overnight stop & service shows that Steve Riley is 1st in the 4wd VF ute, Warren Denham is 2nd in the twin turbo Triton & we are 3rd in the MickleFab Raptor, that is 9 minutes & 40 seconds to catch Steve and only 2 minutes & 16 seconds to catch Warren.

On waking in the morning the truck is sitting a little funny, the left front has gone down overnight with a stick as big as your thumb hanging out of the inside of the sidewall and snapped off flush with the rubber. A quick change and time to go.

SS4 and back into the hanging dust, 40Km in and a set of gutters in the thick dust and that was untidy, but not as untidy as Warren as there it is on its side after going over 4 times. After the dust had settled and confirming Warren & Arron are ok its back to it. After see the your brother in that kind of mishap, you tend to not dive as hard and the end of the section shows a further 5 + Minutes off the pace set by Steve in the Holden.

SS5 and there is my brother telling me to drive harder or he will kick me out of the seat. A short 36Km stage so no time to waste. No troubles except for missing the water splash call at 160Kph, wow what a splash, the times show winning the stage by 5 + minutes and back to almost even times for the day.

A service and into SS6 140Km of rough tracks. 40Km in and in dust of the lead car but I need to get around if I want the top step of the podium and then, the brakes fail. Straight to the floor, nothing. The first mechanical problem the MickleFab Raptor has had. I know then that there is no chance of a win but I need to try and fix this to keep second. After stopping for 10 minutes and managing to cap off the brakes to the left front it was going to be a tentative drive to the finish. With a number of bush excursions when 3 wheel braking, how long can the Mickey Thompson tyres last. The stumps, the gutters, the fallen trees we run over with the right side was incredible that we didn’t have a flat yet, and yet it had to be. The finish of the section and the event another 7 + minutes down a total of 16 minutes & 48 seconds but managed to keep second by 38 minutes & 19 seconds.

Big thanks to all that has made the event happen, CMP Manufacturing, Trans Vent Spiral Tubing, MickleFab Off Road Racecars & Mickey Thompson for Getting me to the event and letting me loose and a number of Farmers paddocks.