See how the journey continues for David Cook on his Cape York Adventure. Make sure you check out Blog 1, Blog 2, Blog 3, Blog 4 & Blog 5.

Last time you heard from us, we were splashing about in Bertie Creek on the Old Tele Track, reveling in some of the first safe swimming locations we’ve had since the beginning of the adventure. We wanted to push on through to Cockatoo Creek to make camp for the night, but that meant tackling Gunshot in the afternoon. We don’t have to tell you about the infamous reputation that the Gunshot Creek descent has earned in the 4WD community for you to understand that tackling it on a time limit is not the best way forward. With that in mind, and a solid 5 hours of daylight to complete the crossing and 20km of driving, we set out to make Cockatoo our stop for the night.

There is a Bypass track that winds out to the East and then back again, but we thought we would just head down to the crossing to have a look, and hopefully watch a few fellow travellers take the plunge to the bottom. The turnoff to the Bypass is 10km shy of the creek crossing, and takes you across some high flat plains in the Heathlands Resource Reserve. It’s an area that most stories don’t talk about, but it’s a stark change to the landscape that makes up most of the OTT.

At Gunshot, we took our time assessing the lines into the main three descents as well as some of the lesser drops with a muddy bottom that are around to the Western side of the crossing. We were the first group that pulled up, and the 30 minutes we looked at the crossing, several other travellers pulled up and started going through the same motions. It became obvious after a while though, that we were each waiting for someone else to commit to the plunge first. Russell in his 80 Series and Dave both decided that ‘Slingshot’ was the right track to take into the creek crossing. Rich and matt in the Isuzu D-Max and Mitsubishi Trion both opted for the muddy side which offered a slightly more forgiving departure angle for the longer tub rears on their vehicles. 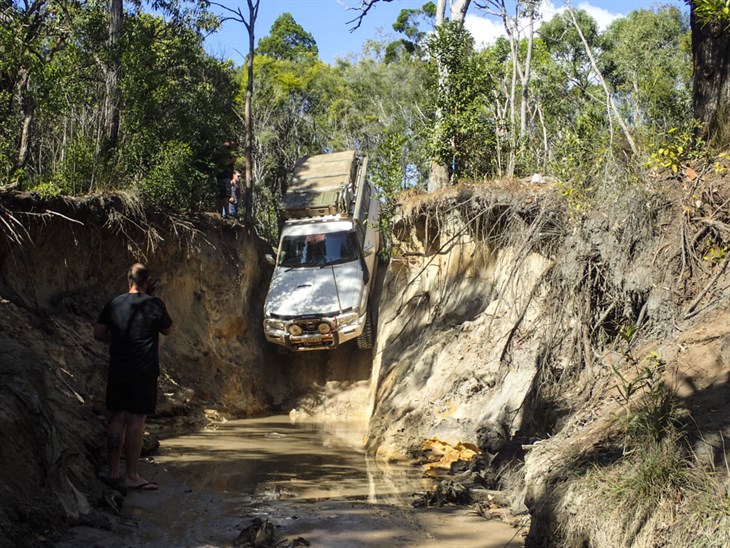 Russell opted to get in there and show the waiting crowd how it’s done. The 80 Series is also wearing a set of the MTZ tyres, and he very bravely inched it over the edge. Things were going well as inch by inch the 80 hugged the passenger side bank and crawled into one of the most hair raising angles that a car can get on without going clean over. The moment the rear wheels came over the top lip though, gravity took over and pulled the big girl straight to the bottom. This is the inevitable reality of the Gunshot crossing, which was expertly mitigated by the achingly slow initial descent. The Patrol was next up… or down in this case, and followed the same example. Even with both lockers engaged and the tyres holding on for dear life to the very edge, there is no arguing with the power of Gravity, and the GU also took the plunge at the very last moment. You might have seen in some of the photos the set of recovery TREDS that are mounted to the rear tyre of the Patrol… Take it from us, they should have been removed before the descent. The crunching, snapping noise from them being dragged down the last section of the wall is not something you ever want to hear from your vehicle. Their solid design saved them from any catastrophic damage though. One of the TREDS suffered a small crack near the base, and the other one came out unscathed. We cannot stress enough the importance of buying quality products & accessories, regardless of the brand. Cheaper imitations would not have fared nearly as well!

The D-Max and the Triton made it down the muddy section on the Western side of Gunshot without issue, but the shorter departure angle of the D-Max coupled with a near perfect balance of caution and throttle application saw the D-Max through without requiring any assistance.

We made Cockatoo Creek just as the sun spent its last rays of light. This crossing was a fairly simple affair once the location of some of the larger potholes were identified and avoided. We’ll be completing the OTT over the next 2 days, for all the action visit our Facebook page.