See how the journey continues for David Cook on his Cape York Adventure. Make sure you check out Blog 1, Blog 2 & Blog 3.

The Kalpowar crossing camping area has been well maintained. We spoke with Tony, the ranger in charge of the Lakefield National Park Ranger base while we were there, who’s been a ranger in the area for three years, and has spent 18 years in total with the Queensland National Parks Rangers. He told us that there had been a recent sighting of a 16 foot Crocodile near the river crossing. While we did try our luck with the fishing, it was certainly from a safe distance. 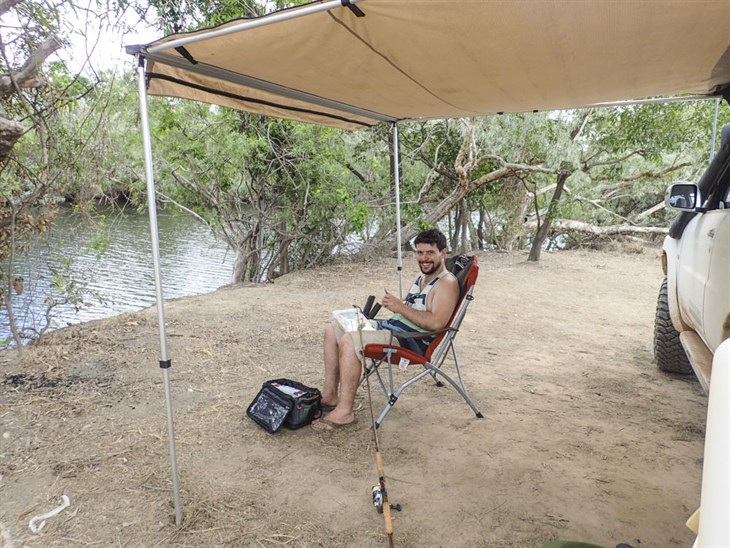 After a day of Rest & Relaxation, the convoy was ready to move on, heading west through the park towards the Peninsular Developmental Road (PDR). We stopped in for lunch and a lazy day by the river at the Hann River Crossing, where the fishing was much better, we had many strikes at the lures, but could not for the life of us get anything to hook up. We’re hoping our luck would change for the better further north.

We crossed the Nifold Plain, which is dotted with the iconic termite mounds as far as the eye can see, we joined the PDR at the Musgrave Roadhouse, where we got our first taste of the corrugations to come.

Although the speed had increased to an average about around 80km/h we left the tyre pressures at 30psi to try and absorb the harshness of the vibrations transmitted through the vehicles. At this late stage in the season, the road is in a bit of a sad way. That being said, we made it into where we made camp at the Exchange Hotel and headed in for a much anticipated pub meal.

Coming up, we tackle the iconic Old Telegraph Road, and head for the very tip of Australia. To follow our tracks visit our Facebook page.