Cooktown to Musgrave Roadhouse via the Starcke Roadhouse.

See how the journey continues for David Cook on his Cape York Adventure. Make sure you check out Blog 1 and Blog 2. 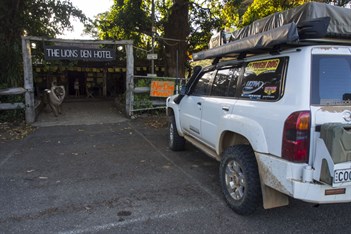 We’ve hit the first section of real low-range 4WDing! Or so we thought… After a fantastic night at the Lion’s Den Hotel, we were keen to get into our first stretch of remote 4WDing and camping. We’ve chosen to take the less direct, and far more remote route north along the coast rather than directly up the Peninsula Developmental Road. The road to the mouth of the Starcke river is in great condition and we were able to average around 80km/h for the first section. The MTZ’s were set at 30 psi to absorb the bumps and corrugations. Tyres are the second member of suspension, so while the Tough Dog 45mm Big Bore adjustable shocks are holding up to the roads, having the tyres set correctly makes a massive difference to both comfort and the wear pattern. Soon after taking the turn onto Battle Camp Rd just outside of Hope Vale we came across a shallow causeway that hid a very pretty waterfall that was shallow enough to dip the toes in.

We arrived at the mouth of the Starcke River just after lunch, which was to be our home on the beach for a few days. The tyre pressures had risen by 3 psi as a result of the day’s driving, which is the perfect amount of variation. The mouth of the River is situated within Aboriginal land but at the time of writing does not require a permit to enter. We made camp on the beach and eagerly set about throwing out the first Crab Trap in the mangroves on the northern end of the beach. It’s the first time we’ve really felt like we are a long way from civilization.

We were expecting to see a Croc or two on the beach early in the morning, but luck was not on our side (or was – depending on how you look at it.) Knowing that we had some Rough track ahead. We packed and got on the road early. About 15km North of the Starcke River mouth, the track crosses the Starcke River in a more shallow section. Almost instantly though after the crossing, the road deteriorates into a two rut track that winds through the long grass North. While the original road was straight and probably in reasonable condition, the remnants of the track that are left there today can only be described as torturous for both the drivers and the vehicles. This isn’t because the driving is difficult, or long, but its very slow going for very little reward. Towards the end of the track through the views of the Iron Ranges, the namesake of the National Park is fantastic. Because the driving is neither rewarding nor challenging though, we’d recommend accessing this area via the road from Laura or the Musgrave Roadhouse.

Cooktown to Musgrave Roadhouse via the Starcke Roadhouse.