Buy the 4WD you really need 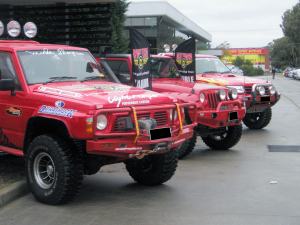 So you’ve decided to get into the 4WD scene, or you’re upgrading and you’re wondering what you should buy. Get what you need, not necessarily what you want.

We’re not going to get into the subtle differences between needs and wants (try any management course for the full injection) but it’s important to differentiate between what you’re actually going to do with the machine and what your fantasies are. For example, there’s no point buying a hard-core 4WD with all the full-on bush gear if what you really need is a people mover that can tow.

The way to work out the difference between dreams and reality is to sit down with a pen and paper (or computer if you’re a post-baby-boomer) and write down your monthly and annual-holiday schedule for the vehicle. This process should give you basic info on likely mileage; number of seats required; the amount of stop-start and shopping work; the amount of cargo space; towing capacity; and the type of off-roading you intend.

Ute or Wagon
If you need three rows of seating for at least some of your vehicle duties then the choice is automatic: a wagon. If not, you should consider the pros and cons of utes and wagons.

Utes are more ruggedly built than all but the most bush-capable wagons and have greater cargo space that has the added advantage of being separated from the passenger space.

Utes can carry more payload than wagons and can take light truck tyres that are generally tougher than those fitted to wagons.

Short-cab or extended-cab utes are obviously suitable for full-time use only by a couple, but small kids can be fitted in the back of extra-cabs, if you don’t need the behind-seat space for a fridge and luggage.

Crew-cab utes are popular alternatives to wagons, offering full-time seating for four or five, depending on the size of the back-seat occupants.

Wagons are more ‘civilised’ than utes and have car-type ride and accommodation. Cargo is generally more theft-proof in a wagon than in a ute.

Ride quality and handling are compromised in utes, compared with wagons, in the interests of payload capability.

How Big A 4WD
Most people ‘over-vehicle’ themselves and drag around more weight than they need. Light machines don’t bog so easily, are easier to recover and use less fuel.

For example, if you’re travelling two-up you’re better off with a small to medium-sized vehicle that’s still large enough to hold your freight, or powerful enough to tow your trailer. If you have four or more on board, or a very heavy towed load then a larger vehicle is necessary.

If you’re buying a 4WD for The Big Trip don’t assume that you need to take all your personal belongings with you in order to have a successful holiday. Get some practice packing for camping trips and do as many short trips as possible in friends’ vehicles or hired machines before you settle on the vehicle you want for the main event. Many 4WD newcomers buy vehicles that are capable of carrying stuff they never use.

What Engine Size
If step one of this article showed that you’re likely to tow or do high mileages each year a good power to weight ratio is necessary, to allow the engine to cruise without stress. Running a low-powered engine at high revs to maintain the desired cruising speed wears out the engine more rapidly and can result in fuel consumption that’s heavier than that of a larger engine that’s just loping along.

Engine capacity used to be the principal way of evaluating engine performance, but in these days of turbo-charging and supercharging the displacement of an engine isn’t a reliable indicator.

The engine maker’s power and torque figures are the best guides to expected performance, along with knowledge of what speed the engine runs at when cruising at 100-110 km/h.

Petrol or Diesel
In the not too distant past diesels gave much better economy than petrol engines, but with a performance penalty. That’s no longer the case.

Diesels also used to be more reliable and simpler than petrol engines, thanks to mechanical injection and no electrical system, other than a starter motor, but that’s also no longer the case. (In reality, diesels have relied on electrics for more than 20 years, because all pre-chamber, indirect-injection diesels – most Japanese diesels were of this type until recently – used glow plugs to heat their injection chambers, and all key-start and stop diesels had electric fuel shut-off solenoids on their injection pumps.)

Modern 4WD diesels are turbocharged and intercooled, and have electronic injection control in some form. That makes them at least as complex as petrol engines and means they face diagnostic problems. Many bush garages are unable to diagnose problems in modern diesels.

That’s not to say that the modern diesel 4WD doesn’t belong in the scrub, but it’s not the no-fuss proposition it used to be.

Petrol engines have used electronic fuel injection for many years and more is known about them off the beaten track. Modern 4WD petrol engines have excellent performance and economy has improved – not to the point of challenging the turbo-diesel when towing or off-road, but better than previously.

Petrol engines with LPG conversions used to be a good economy move, but the Federal Government’s policy of tying LPG retails to petrol and diesel prices makes that a slightly less attractive option. (It wouldn’t be quite so irritating if they weren’t flogging our North West Shelf LPG overseas for a pittance.)

Autos work very well off-road and many drivers prefer two-pedal control in tricky situations. The main downsides are generally poor engine braking, the possibility of overheating in high ambients and the inability to clutch start the vehicle. Towing an auto can also be problematic.

Manuals are less complicated than automatics and are still the preferred transmissions for hard-core 4WDs.

Full-Time or Part-Time 4WD
If you’re hunting for a ute you’re pretty much stuck with part-time 4WD, except for the Land Rover Defender full-time 4WD, VW Amarok automatics and some Mitsubishi Triton models. Others make auto hub and auto front diff engagement systems, but they are really embellishments of a basic part-time 4WD system.

If you’re shopping for a wagon the choice of 4WD systems is much greater.

Full-time 4WD operates through a lockable centre differential in the transfer case. It’s by far the simplest system, after a basic part-time design, and the major ‘real’ 4WD makers employ it: Land Rover, Range Rover, Toyota, Nissan, Jeep and Mitsubishi (yes, we know that some Jeeps, Mitsubishis and the Nissan Pathfinder have selectable full-time-part-time-4WD, but the basic full-time bits are included).

On-demand 4WD systems abound in the market place, but our testing shows that none of them can match a full-time system for serious off-road work. Viscous-coupled systems suffer from heat problems, which is why Jeep abandoned them; clutch types have potential wear difficulties; and pump types have too much engagement delay.

Generally speaking, you lose more in depreciation if you buy a top-shelf machine, but if the embellishments in a top-shelfer are important to you, go for them. (Personally, we hate leather seats in the bush, because they get too hot if left in the sun and they make a slippery base for cloth seat covers. Sunroofs are another luxury inclusion we think the Australian market could well do without.)

Top-shelf utes are about the equivalent of mid-spec wagons, with power windows and mirrors, central locking, a half-decent sound system and aluminium wheels. Watch out for passenger-car-type tyres on top-shelf utes, along with possibly less payload capacity than base models.

Mid-spec wagons are usually more keenly priced than luxury-level ones and be on the lookout for ‘specials’ with added equipment at bargain prices.

New or Used
In these days of long warranty periods buying used isn’t necessarily the risk it once was. If you aren’t hooked on having the latest and greatest you can save thousands by buying a two-year-old 4WD. One of the great benefits of the ‘suburban 4WD’ craze is that there are plenty of used machines in the market place that have had little or no off-road work.

The best scenario is buying one from a dealer who will ratify the warranty transfer to your name. If you’re buying privately and expect the original warranty to be transferred make sure that the first owner has complied with the warranty conditions – particularly with respect to servicing intervals.

A new vehicle purchase takes away these warranty worries, but you’ll pay a premium for being the first owner.

Choose Your Add-ons Before You Buy
If you’ve done the exercise outlined in Point One of this article you’ll know what add-ons you’re likely to need on your chosen 4WD, such as suspension changes, special purpose tyres, roof rack, tow bar, bull bar, winch, lights and diff locks.

Working out what additional equipment you want will often dictate what vehicle you buy. For example, if you’re aiming at doing hard-core trips a pair of across-axle diff locks would be indicated, but you can’t get a double diff lock kit for every vehicle.

If you plan to fit special-purpose tyres you need to know that the tyres and rims you’re thinking of will fit the vehicle you plan to buy. Many new 4WDs have specific rims designed to fit over large brake packages and can’t accept traditional rim sizes.

Buy the 4WD you really need