All 4 Adventure - The legend of Mickey Thompson

WHO WAS MICKEY THOMPSON?


Jase Andrews from All 4 Adventure explores the story behind the man whose name is on the world famous off-road tyres and discovers a racing legend, a brilliant innovator, and an off-road champion.

Mickey Thompson is a giant amongst racetrack heroes. He is the driver who holds more auto speed records than anyone on earth. He is the tyre innovator whose tyres were used on fast attack vehicles in the Gulf War. He is the man who never gave up.

How did Mickey remain so determined to succeed against the odds? An IQ test revealed Mickey was near genius. His brilliant mind, steely determination and love of auto racing meant Mickey didn't stop until he saw his revolutionary ideas come to fruition.

After Mickey had broken hundreds of auto speed records, he went on to help elevate off-road racing to its present status through sponsorship, celebrity involvement and stadium events. Mickey inspired the racing world and his contributions are still felt today.

When Mickey was discussing the publishing of his life story with friend Tom Madigan, he told Tom "If just one kid reads my story and realises that he can better himself by just determination and guts, then I'll be happy."


Episode one
THE RACING LEGEND


All 4 Adventure’s Jase Andrews tells the story of how Mickey Thompson rose from a scrappy California street racer to become the fastest man alive.


Jase is amazed to discover how many revolutionary technical innovations came from the brilliant mind of racing legend Mickey Thompson.


Jase shares the inspiring story of how Mickey Thompson took on the gruelling Baja 1000 and became an off-road racing legend. 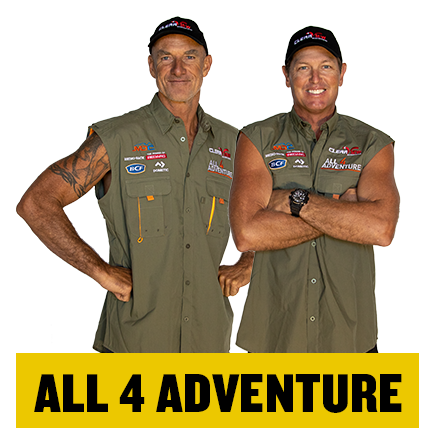 Why they choose Mickey Thompson Tires

"Tyre choice is so important, particularly when you travel to the places that we go. In this series, we covered over 12,000 kms across all sorts of terrain - from the gibber plains and endless sand dunes of the Simpson Desert, the high speed corrugated dirt tracks in central Arnhem Land, the sharp rocky jump-ups on Groote Eylandt, and the treacherous muddy swamps of the Gulf Country. Every step of the way we were counting on our Mickeys to get us through and our Mickeys never let us down. We were using MTZp3 tyres on all our trucks and trailers, and I can tell you, they are one tough tyre. That is absolutely why we're Mates of Mickey."

Read more about the boys here…