Mickey Thompson is a giant amongst racetrack heroes. He is the driver who holds more auto speed records than anyone on earth.  He is the tyre innovator whose tyres were used on fast attack vehicles in the Gulf War.  He is the man who never gave up.

How did Mickey remain so determined to succeed against the odds? An IQ test revealed Mickey was near genius. His brilliant mind, steely determination and love of auto racing meant Mickey didn't stop until he saw his revolutionary ideas come to fruition.

After Mickey had broken hundreds of auto speed records, he went on to help elevate off-road racing to its present status through sponsorship, celebrity involvement and stadium events. Mickey inspired the racing world and his contributions is still felt today.

When Mickey was discussing the publishing of his life story with friend Tom Madigan, he told Tom, "If just one kid reads my story and realises that he can better himself by just determination and guts, then I'll be happy."

Danny Thompson, Mickey's son, has decided to resurrect his fathers 1968 Challenger II Streamliner and use it to break the piston land speed record at Bonneville. On the 50th anniversary of his father's original run, Danny removed the Challenger II from storage and brought it to his Huntington Beach shop.

Untouched for almost forty-five years, he began the extensive process of restoring, retrofitting and updating the vehicle. Danny wants to lay his father's business to rest. For him that means taking the Challenger II, a vehicle that hasn't run since 1968, to the salt flats at Bonneville going at least 450mph. That's what it will take to break the piston driven world land speed record.

Read on to hear Danny's account of his fathers history and some original footage that has never been seen before. 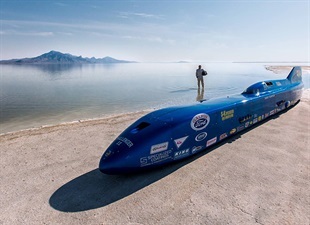 Mickey scraped his first car together from junk yard bits and used the high school workshop to mill heads and grind parts by hand.

Racing was on the streets. No rules. No restrictions "If it wasn't dangerous you weren't really racing." According to the local police department, Mickey Thompson was the "best in the street."

When Mickey was 9 years old, his father took him to the Bonneville Salt Flats in Utah to watch Englishman John Cobb's set a new land speed record - 394.2 miles per hour. As Mickey stood there on the salt flats, he vowed that one day he would beat that record.

Wanting to build the first 500 mph tyre, Mickey Thompson and Gene McMannis, engineer, started designing their own tyres. In 1960, these tyres helped him become the fastest man on earth by travelling at 406.6 mph (650.56 kph)

No sports spectacular anywhere rivalled the INDY 500; in 1962 Mickey decided to enter with rear engine vehicles rather than the front engine roadsters of the time. The technical committee challenged nearly every feature of Mickey's cars but when they finally passed, Mickey failed the medical, leaving his mechanic as the driver. "You can't win your first INDY, there's just too much to learn."

Mickey returned with lighter vehicles requiring tyres that were wider with a 'lower profile' and softer compound rather than the usual narrow tyres with a harder compound. Mickey's tyres and vehicles caused complaints amongst many drivers leading to changes in the rules for future races but paved the way for 'Low Profile' tyres, standard in today's passenger tyres and the tyres you see in Indy car and Formula One racing today.

The Switch to Off-Road

Mickey organised to bring the thrill of off-road racing to the stadium before 40,000 cheering people, setting up SCORE International and convincing celebrities like Arnold Schwarzenegger to compete to raise the sport's profile.

- During his life, Mickey raced in over 10,000 events and covered over one million race miles. He won championships in diverse categories of auto racing such as; midgets, sprint cars, off-road vehicles, stock cars, drag racing and sports cars.

- Mickey's contribution to motorsports earned him an induction into the International Motorsports Hall of Fame in 1990.